“It is by riding a bicycle that you learn the contours of a country best, since you have to sweat up the hills and coast down them.” Hemmingway.
Frank & Jacinta on the road in Mexico.

In the morning Frank discovers that he has lost his biking hat (to wear under his helmet as protection against the sun). Did it not return from the laundry? Did he leave it somewhere? We do already know he can’t bike with his normal hat in combination with his helmet, gets really grumpy after a few hours as the combination hurts. As we are in a city with milions of people, we try to find a new hat, check at least 5 bike shops but nobody has this. Fun is to meet one of the owners of one of the shops and see straight away he is a bike addict, we let him try my bike and he is ecstatic on the way the Rohloff is shifting.

He thinks our bikes are almost like cars with the belt etc. Fun to share 😊. Getting out of Puebla is a challenge as with all big cities but we are getting good at it. It is a long ride on the Toll road 150D (4 lanes with divider) but at least we cover some miles.
We decide to stay at Cuacnopalan a few kilometres from the toll road.

In this 1,500 inhabitants village we find a very, very basic motel but clean and they even cook dinner and breakfast. Next day Toll Road 135D is less busy but also only 2 lane and ½ shoulder which is often used as an extra lane.

In more than 3,000 kilometres biked in Mexico we have not seen one accident until today. We pass a long stretch and see in the distance something that looks like a truck in the bushes. It seems to have just happened as there are only a few cars and no ambulances. I run through tons of spilled beans to the cabin which is up-side down. There are already people talking to the lady hanging up-side down in the cabin, when I offer to help the ambulance doctor and a whole team arrives. We leave to let them do their job.
Heavy stuff. We don’t know if they both survived. Again this is an accident that makes you think how it could have happened. Most trucks drive with two people, it was mid-afternoon, straight stretch of road, so what happened here?

We decide to veer off in San Gabriel (5,000 people) and not go to the big city, we are happy we did. The people are super nice. Even when we want to buy two oranges we get them for free (shopkeeper who could use some money) and in the next one I get also the avocado for free. In the evening we eat 10 tortas and enchiladas with Chely and only have to pay 2 euro for everything.
Biking out of town I need to peak through a door as I hear a strange mechanical sound. Seems it is one of the production locations for Mexican Blouses. George employs 15 people! Great job!
We can’t spend more time as he needs to bring his beautiful 5 year old daughter Nathalie to the Spring Parade. All prep school children participate in this parade which we are more than happy to see.
Fun delay is being able to talk with quite a lot of the ladies of the city. What we noticed is that people really leave you your space, they are not as in Asia where they ask where you come from all the time. Here they are interested and if they see you are open for a conversation they do like to talk with you.

Accessing the 135D we first use a back road, were we are slightly worried entering the next village; we see policemen running around with guns, which is no fun, they are chasing somebody on foot but reassure us it is not dangerous.
We are biking through the cactus garden of this area today, this is a bio reserve. there seem to be more than 2,000 different types of cacti.
We recognise a few from our previous travels but also see quite some new ones, different after each corner, changing with the altitude as we go from 1,000 to 2,100m. This part of 135D is the best we have had in Mexico.

Hilly, quiet, enough space, no agriculture, so many other things to see. For the first time on mainland Mexico we see on the other side of the road two other bikers, Njal & Roosemarijn, Dutch from Amsterdam, biking from Argentina to Canada.
Already 14 months on the road for the part we still have to do in 10 months.. Ok they did bike the loop of Yucatan but still that’s 2.500 km more which should not take 4 more months. I more and more start to doubt if we will be able to make it by January next year. After 64 km when we are in Tepelmeme we call it a day. This has the first motel we see next to a petrol station, new, clean and good Mexican food. Perfect spicy omelets will keep us going during the morning, taking extra for lunch as we are running out of food and don’t know what we will find further along the toll road. The landscape is changing from cacti to pine or cleared out white mountain ranges. Herds of goats along the road herded by kids who should be at school.

Biking on the new highway you again see the impact of humans on landscape. Toll roads are built with the shortest distance between A-B in combination with maximum 5% decline or ascend. This mean cutting through some mountains. You cut thru a mountain, the mountain crumbles. You build a small wall. Does it stop the mountain?

Due to the late start we arrive at 16:00 in Nochixtlan. We enter the city with a total different view due to what we read on Njals FB page. There have been riots 2 years ago, when the Federal Police tried to break road blocks put up by protesting professors and students. As we are entering from the opposite side than they did, we only see the burned down Federal Police Office. Only see the next day the burned down bus & trucks which are still left there as a silent reminder of the police action that left 8 people dead and 100+ injured when protesting against the changes in education system.
Strange to still see this in the middle of the road when you enter/exit the city at the South side. Better than just a monument. Daniel Cuevas, President Municipal, apparently played a dubious role in the whole story. We believe following pictures say it all.

Following 135D there are suddenly several road shops all selling wooden toys, mainly trucks! We talk with one of the creators, seems that mainly in the weekend sales is OK but remainder of the week it is only mediocre.
He lives with his wife and 1 son in the mountains and we are invited to camp at his place but it is still too early so we continue South.

Last stretch to Oaxaca we follow a Google bike route, sneaking off the highway, following some dirt road and in the first village we bump into a procession for the Virgin de Dolores. Biking past several purple trees creates a feeling of spring when entering this big city. In the centro historico we try to find a hotel where we safely can store our bikes. Good to not have booked anything beforehand as we try 4 different places before we say yes to a small apartment with it’s own kitchen. Happy, we will be able to cook! Even if the food is great and not expensive, I love the ritual of creating our own meal. We decide to stay here at least for 2 nights to discover the city. Early Saturday morning we get a call from Carmen, our sister in law, that her dad suddenly has passed away. Sad news which brings you back to reality on how far away you are from family and friends and how little you can do to support them. It does not take long to decide that we will fly back for the funeral. We have made mistakes in the past of prevailing work or holidays to being with the people we loved on special moments in their lives. Now we do find the possibility to return on time and will try to do this. 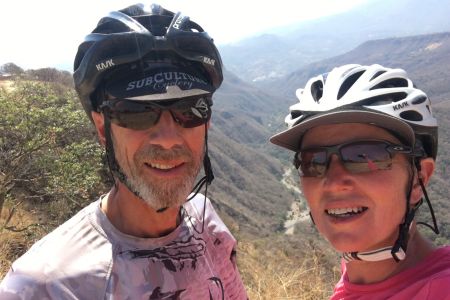